RunStrong, the Kevin Armstrong M.D. Memorial Sports Foundation's (KAMSF) signature program, targets the development of intermediate students' character along with healthy lifestyles because children in this age group are the most susceptible to falling behind in school.KAMSF is a key partner with the Santa Ana Unified School District's Intra-Mural Sports Program. When the district faced budget cuts, the KAMSF stepped in to provide needed support to keep inter-school athletic competitions going for at-risk intermediate school children in Santa Ana. 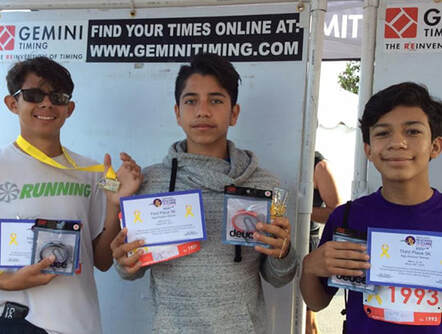 ​RunStrong students participate in four races throughout Orange County, averaging over 150 students per race! We covered the cost of registration fees, transportation to and from races, and race team T-shirts. We distributed over 1000 pairs of new running shoes to RunStrong program students. RunStrong students attended a private screening of "McFarland USA" at Downtown Disney on opening night, ​February 20th and were inspired by the stories of Latino youth who achieved great success through running.The teachers, parents and RunStrong students themselves reported improvements in their performance in school and a rise in self-confidence. Students' testimonials are captured on the Foundation's website. 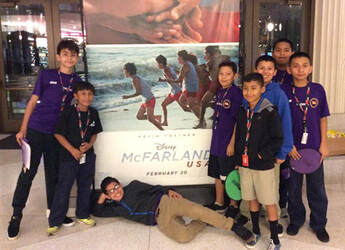 KAMSF has purchased and distributed over 30,000 Foundation T-shirts to student athletes during Intermediate School Tournaments in basketball, soccer, volleyball, flag football, and track & field. As a co-sponsor for the District-wide Intermediate Schools Track Meet, the KAMSF supported the event by volunteering, providing healthy snacks to over 500 young people and providing a "thank you" lunch for coaches and other volunteers.
KAMSF is gearing up for another active year to meet the diverse needs of youth in Santa Ana. YOUR SUPPORT is critical for us to continue efforts such as the RunStrong program and support for intramural sports, as well as expanding our programming to youth leadership development. We are excited about the upcoming school year and ask for your support in sponsoring programs for student athletes in Santa Ana and providing opportunities that they would not normally have.
Thank you for your support!

"I would like to thank the Armstrong Foundation for giving me the opportunity to play basketball. I am also appreciative and have respect for what they are doing to help me and other students. I don’t think I can thank the program enough." ~ Raymart