Meet our all-volunteer Board of Directors

Kevin Yen, President
Kevin has enthusiastically supported the Foundation since its inception in 2005, working with the Armstrong family, the Santa Ana Unified School District (SAUSD), and friends to continue Dr. Armstrong’s service to the student-athletes of Santa Ana. At Woodbridge High School, Kevin became lifelong friends with Dr. Armstrong and fellow board member Kevin Tonai. Between games of Intellivision, track practices and late night “study sessions,” Kevin witnessed Dr. Armstrong’s dedication to achieving his goals and his service to others in the community. By working at the Foundation, Kevin continues Dr. Armstrong’s legacy of community service and belief that all kids deserve the opportunity to realize their full potential. Kevin applies his business experience to oversee the Foundation’s finances.
After living for a number of years on the East Coast, Kevin is happy to be back home in Southern California, where he can surf year-round and only see snow when he and his wife go to Mammoth. Kevin can often be found at a 5k race cheering for the kids and occasionally trying to keep up with them. Kevin has an MBA from Dartmouth College and undergraduate degrees in economics and computer science from UC Irvine. 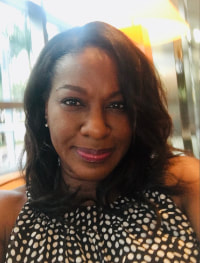 Karen Armstrong, Vice President
Karen has worked in the financial services industry for over 25 years. She's currently Vice President, Wealth Management at Jefferies LLC, a global investment bank, where she is responsible for on-boarding and training new wealth management teams.  In October of 2005, the Foundation was established in celebration of the life of Karen’s brother, Dr. Kevin Armstrong, and his belief that students of modest economic means can achieve higher goals if they receive the proper support, inspiration and opportunities. Karen functions as KAMSF’s administrator by overseeing the day-to-day managerial tasks of the foundation. She’s responsible for many of the marketing, branding and public relation efforts of the foundation, including the pre-race pep talks to the kids. Karen graduated from UCLA with a degree in Communication Studies and is a licensed Investment Advisor. 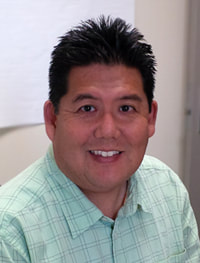 Kevin Tonai
Kevin currently serves as Principal at Manuel Esqueda K-8 School in Santa Ana. He has been in education for 21 years and has worked at all levels within K-12. He has been the liaison between the Kevin Armstrong Foundation and the Santa Ana Unified School District since the inception of the foundation since 2005. Kevin also serves on the Design Team of Common Villages, a new church outreach project in Ladera Ranch. A long-time friend of the Armstrong Family, Kevin Tonai first met Kevin Armstrong when they were both students in high school. They were in the first graduating class of Woodbridge High School in 1983 and served together on the ASB Cabinet – Kevin Armstrong as ASB President and Kevin Tonai as Senior Class President. Over the years they maintained their close friendship until Dr. Armstrong’s passing in 2005. Kevin will tell you that Dr. Armstrong had the charisma of a “rock star” but the heart of a great humanitarian. Kevin has been instrumental in the maintenance of the intermediate school intramural sports programs. Through his efforts and the work of others, the intermediate school students of Santa Ana compete in annual tournaments in cross country, volleyball, flag football, soccer, basketball, floor hockey, and track and field. Kevin received his B.A. in Psychology from the UC San Diego and his M.A. in Educational Administration from Alliant International University. 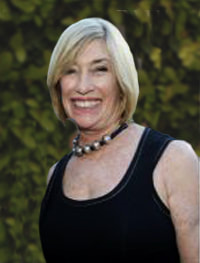 Edie Tonkon
Edie is a long-time and well respected community volunteer. She’s currently the secretary of The Laguna Dance Festival, is active in The Friendship Shelter, Laguna Scholarship Foundation, Bureau of Jewish Education, and the Jewish Community Foundation.
A long-time recreational runner who ran her first marathon in 2006, Edie understands the benefits of running. She loved the big trainings every Saturday morning at 5:30 a.m., and believes that reaching for “personal bests” is a valuable gift from the RunStrong program to the middle school students in Santa Ana, one that will yield lifelong benefits.
Edie’s served on the KAMSF board since 2011, and brings her extensive fundraising experience and long list of community contacts to advance the foundation’s programs. She taught special education classes with SAUSD and has been a school counselor and executive director of a senior center. Her goal is to help grow the foundation by bringing awareness of KAMSF programs to new communities and people. She takes pride in being one of the loudest cheerleaders at the events.
Edie graduated from Boston University with degree in Psychology and received her Master’s in Counseling from Chapman University. 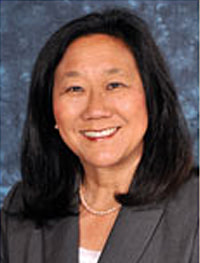 Dr. Audrey Yamagata-Noji
Audrey is the former President of the SAUSD Governing Board having retired from the SAUSD in 2015 after 25 years of service. She currently serves as the Vice President of Student Services at Mt. San Antonio College, overseeing all programs and services related to student support. She has been the principal author for several grants totaling nearly $4.5 million to promote student success and academic performance.
Audrey enjoys her large extended network of family and friends, loves sports along with her husband the legendary Coach Noji, a mainstay in Orange County high school sports. An avid photographer and budding graphic artist, she creates all of the foundation’s flyers, newsletters and annual reports. Audrey has been with KAMSF since its inception in 2005. An inaugural board member for the Santa Ana Public Schools Foundation, she currently serves on California School Boards Association and Orange County Building Communities through Leadership. She brings leadership, organizational skills, community contacts, program design and grant writing skills to the organization. Audrey has a PhD from Claremont Graduate University and is also a licensed Marriage and Family Therapist. 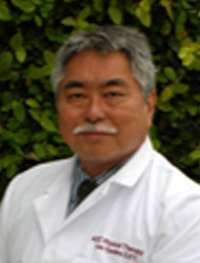 Dr. Ken Yoshino
Dr. Ken Yoshino has been an integral part of the foundation since its inception in 2005. He has over 30 years of experience as a Staff Supervisor and Chief Administrator of a physical therapy practice and has completed extensive work in orthopedic, pre-surgery, post-surgery, conditioning, and preventative care. His concentration is in working with high caliber athletes including US Olympians. When Kevin played varsity football at Woodbridge High School in Irvine, CA, Ken was his trainer. He subsequently maintained a personal connection with Kevin throughout his college career as Co-Captain of Princeton University’s Football Team. The foundation’s Catastrophic Injury Management Symposium has its origins in Ken’s commitment to rapidly identifying and treating sports injuries including concussions, heat related issues, cardiac arrest and spinal injuries. Ken enjoys traveling, and his annual donation of a world-class vacation has become a highlight of the auction at the Foundation’s Annual Golf Tournament/Fundraiser. Ken graduated with a Doctoral Degree in Physical Therapy from Boston University. He also possesses a Bachelor’s Degree in Physical Therapy from California State University, Long Beach, and a National Certification in Athletic Training. 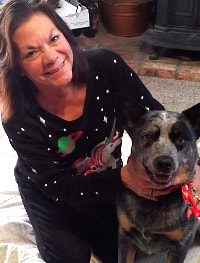 Roxanna Owings
Roxanna joined the KAMSF Board in 2011. She served as the liaison between the foundation and SAUSD. As the primary contact between the District and KAMSF, she aimed to ensure that principals, teachers and coaches were aware of the foundation's activities and that the necessary permissions and paperwork were in place. As the daughter of a high school football coach, she recognizes the importance of participating in organized physical activity. She is aware that the values that one gains (resiliency, independence, discipline, etc.) are but a few of the characteristics needed to live a long and healthy life. Roxanna retired from SAUSD in June of 2017, but continues to serve on the KAMSF Board of Directors. Serving on the Board allows her to continue to serve the students of SAUSD and its community. She keeps active by "working out" with her Blue Heeler, Raider, on a daily basis by walking or hiking for 1 to 2 hours daily. Roxanna has her Master's in Education Administration from California State University Fullerton and a Bachelors in Spanish from UC Riverside. 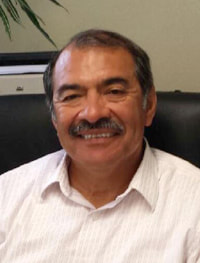 Victor Cota
Victor currently holds the role of Service Chief with the County of Orange, Health Care Agency, Children and Youth Behavioral Health, an agency that provides services for one of the most densely populated regions of California. He brings 30 years of experience working with the families of Santa Ana, providing programs designed to improve their health and well-being. Victor is involved in many community activities, including past board membership with the Girl Scouts of Orange County and current board membership with the Irvine High School Teammates for Life Foundation. Victor feels right at home at KAMSF because he has coached youth sports for many years and brings a sincere passion to inspire others. He is a regular speaker in high schools and colleges, motivating students to achieve academic success and strive for excellence. Victor is a licensed clinical social worker. He earned a doctorate degree in social work from the University of Southern California and a Master of Social Work degree from California State University, Sacramento. Victor was born in Tijuana and immigrated to the United States when he was 8 years old. He is the ninth of 10 children. He is married and has three children, two daughters-in-law and one grandson. Today, his primary sports passion is "running strong" with his German shepherd! 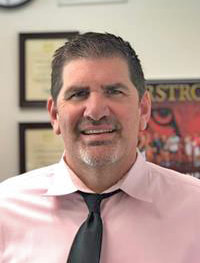 David Casper
David has been in education for 24 years, all in Santa Ana. He started as a Biology and Chemistry teacher at Saddleback High School. In 2005 David opened Segerstrom High School and worked as an Assistant Principal until being named principal at MacArthur Fundamental in 2012. Recently he was named the principal at Segerstrom High School, returning to the school that he opened. Outside of school David is active in the Cypress High School Imperial Brigade, where his own kids go to school, and serves as the Vice President on the board. David first became aware of the Armstrong Foundation while participating in the annual golf tournament that he loves to support. As he moved into the position of principal at intermediate school he saw firsthand the effect of the foundation on his students participating in RunStrong and in intramural sports. The students were more confident and passionate about school which he contributed to the program. The students participated in 5K's and other activities which bonded them as a team. As principal he did what he could to support RunStrong and to provide resources that they might need. David received his B.S. in Biological Sciences from University of California, Irvine, his teaching credential at Cal State Fullerton and his M.A. in Educational Administration at National University.
Advisory Board
Ben Bornstein
Coach Gene Noji
Greg Rankin
Jim Pantaleo

“Since joining the cross-country and track & field team … I have competed in three city-wide events. The Monday after we returned to school I got an award from the principal and was very proud! Thank you again for the Runstrong program". ~ Juan, Sierra Intermediate School in Santa Ana, California